ec-bp.org recently asked you to provide feedback regarding your view of development costs associated with EDI processes and systems. The results are interesting but not particularly surprising. What is disappointing about the overall results is that the majority of respondents talk about the negative aspects of spending rather than about the potentially enabling technologies they are putting into place.
Is your company a...

In keeping with our readership demographics, nearly 75% are supplier organizations, but nearly 20% indicated that they implement EDI between both their own suppliers and their customers. We have seen an increase in the number of organizations that participate as both suppliers and customers over the last 2 years. These organizations typically initially implemented EDI as the result of a mandate from one or more of their customers. Once they have the infrastructure in place and understand the economies that accrue to their customers, they find incentives to make the same use of the technology between themselves and their own suppliers.

This “seat in the middle” provides at least two advantages. First, it provides a combined view of their own supply chain, allowing them to evaluate best practices and better engage with their trading partners. Second, as their transaction volume increases, their systems can (potentially) be used as a data warehouse to evaluate performance and understand trends.

Having a ‘seat in the middle’ is the position that forward thinking organizations that have trading relationships both as suppliers and customers should adopt as a best practice.  Getting a company to this position requires effort and expenditures, but may be a move that pays off in many ways. 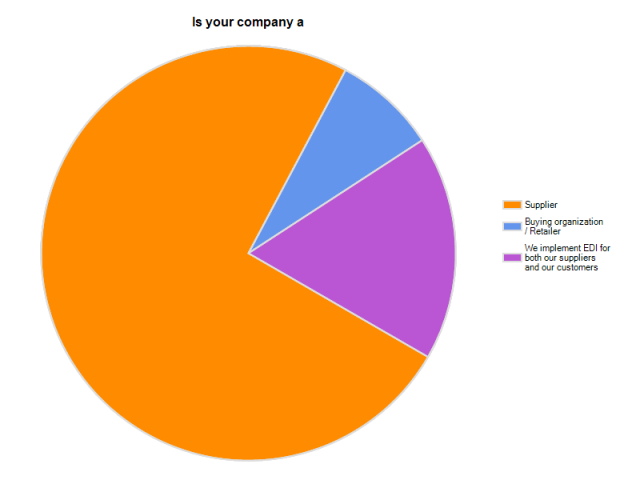 Do you consider costs associated with developing EDI functions to be...

As for how these organizations justify their EDI development expenditures, the vast majority see EDI expenses as a negative to be reduced as far as possible. 56% call EDI a “cost of doing business,” while 27% believe the costs should be reflected as increases in their pricing models. And another 7% say the costs should be minimized even if reduced functionality has a negative effect on business.

On the other side of the conversation, 33% believe that EDI costs are offset by gains in efficiencies. Only 10% believe that EDI can be used as a competitive advantage. This kind of viewpoint is likely to become a standard best practice in the implementation and development of EDI functionality as the ability to leverage the increasing flows of data become less technically challenging. More data properly used, can lead to greater insights in trends, point out areas for improvement, sticking points along the way, and new opportunities that can’t be found without the supporting data. 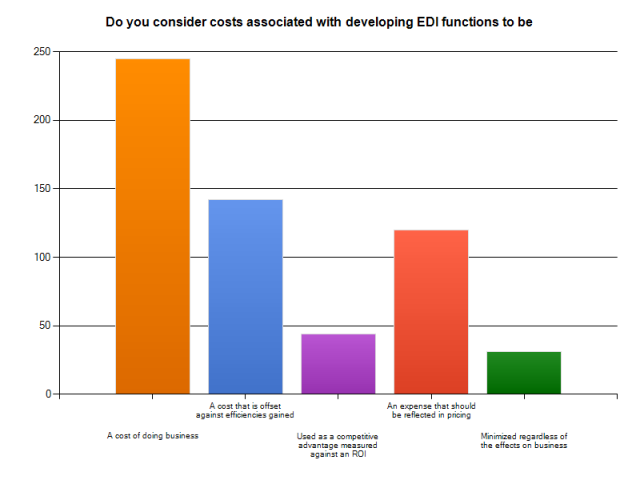 What is the relation of EDI support staff to trading partners in your organization?

Staffing levels are indicators of the efficiency with which organizations have integrated their EDI systems, which in turn indicate the level of effort devoted to their electronic supply chain. Our survey shows a split at the high and low ends, with relatively even distribution at the mid levels.

Some 36% of respondents indicate they have a 1:5 or higher number of support staff to trading partners. This would seem to indicate that they are either very small suppliers with a low number of EDI enabled partners, or that they just don’t have a good handle on their EDI operations.

At the other end of the scale, 25% have a ratio of 1:50 or higher. The simple fact that these companies have more than 50 trading partners means they need to be efficient. They are likely to have developed their own efficiencies to maximize their trading interactions. 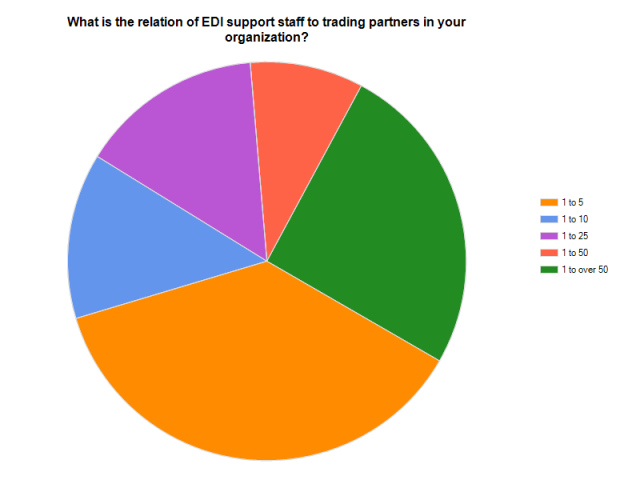 What is your EDI related expense as a % of sales?

This metric is not normally measured, and there are no standardized metrics defining what components should be included / excluded in measuring these costs. However, the vast majority indicated that their EDI costs as a percentage of gross sales were insignificant, often below .01% of gross sales.

Accurate evaluation of this measurement could be a good indicator of efficiency or alternatively as a measure of how seriously an organization considers its efforts in the area of electronic commerce and trading partner automation.

How do you measure trading partner satisfaction with your EDI efforts?

50% of respondents report that they measure trading partner satisfaction by the number of transactions that pass through the system without error. However nearly as many (42%) answer that chargebacks are the defining factor, and 37% gauge satisfaction based on complaints from their customers.

Only 12% of respondents indicate that they base their metrics on surveys and other customer interactions. Positive and proactive campaigns that engage with customers to determine levels of satisfaction should be expanded in most trading partner relationships. While the vast majority of respondents evaluate satisfaction based on negative criteria, the more positive interactions based on questions and conversations provide much more opportunity to engage with trading partners and change what may be a deteriorating relationship into a constructive one. 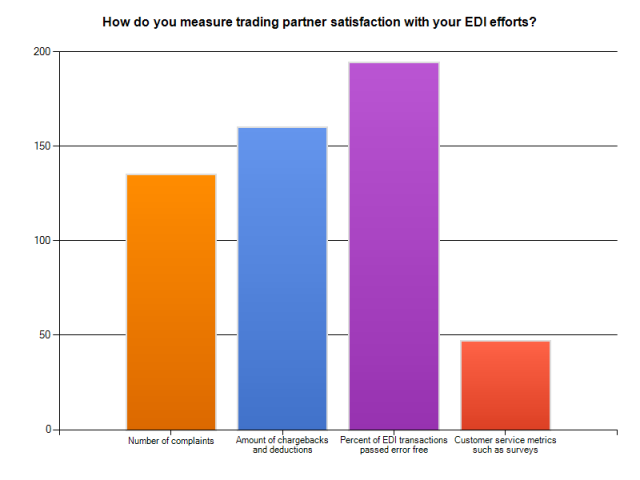 Add your comments about the criteria you use to determine whether to make investments in EDI related process.

On the positive side, several respondents indicate that they strive to ascertain the needs of their trading partners and determine how and whether implementing particular functions (EDI documents, automated processes, etc.) will benefit their trading relationships.

More than half the respondents indicated that their motivation to make investments in EDI technology and process was determined by the demands of their trading partners - usually a large customer who requires them to use EDI. Many of these comments were simply factual, stating that they had no choice in the matter other than to loose the business. Others were more adamant in their condemnation of either EDI, the process, their relation with their customer, with their EDI service provider, or some other aspect of their EDI implementation.

Last modified on Friday, 10 February 2012
Read 3165 times
Rate this item
(0 votes)
Tweet
Tagged under
More in this category: « Why Outsource the Onboarding Process Should EDI be outsourced? »