The Rise of the Porch Pirate: Why Consumers Need to Rethink Their Delivery Locations Featured

As package deliveries have increased due to e-commerce shopping, so too has package theft.

Porch pirates, or package thieves, exploit the fact that most online shoppers receive their packages in unsecured areas such as building entryways and outdoor mailboxes.

As porch pirates use increasingly sophisticated tactics, consumers must reconsider the security of their packages.

Review this article to learn how to protect your packages from porch pirates.

Porch pirates target the plethora of daily packages that are left waiting in unsecured locations after delivery.

A recent Clutch survey found that more than half of online shoppers (57%) typically receive their packages in an outdoors, unsecured area, such as a front porch. 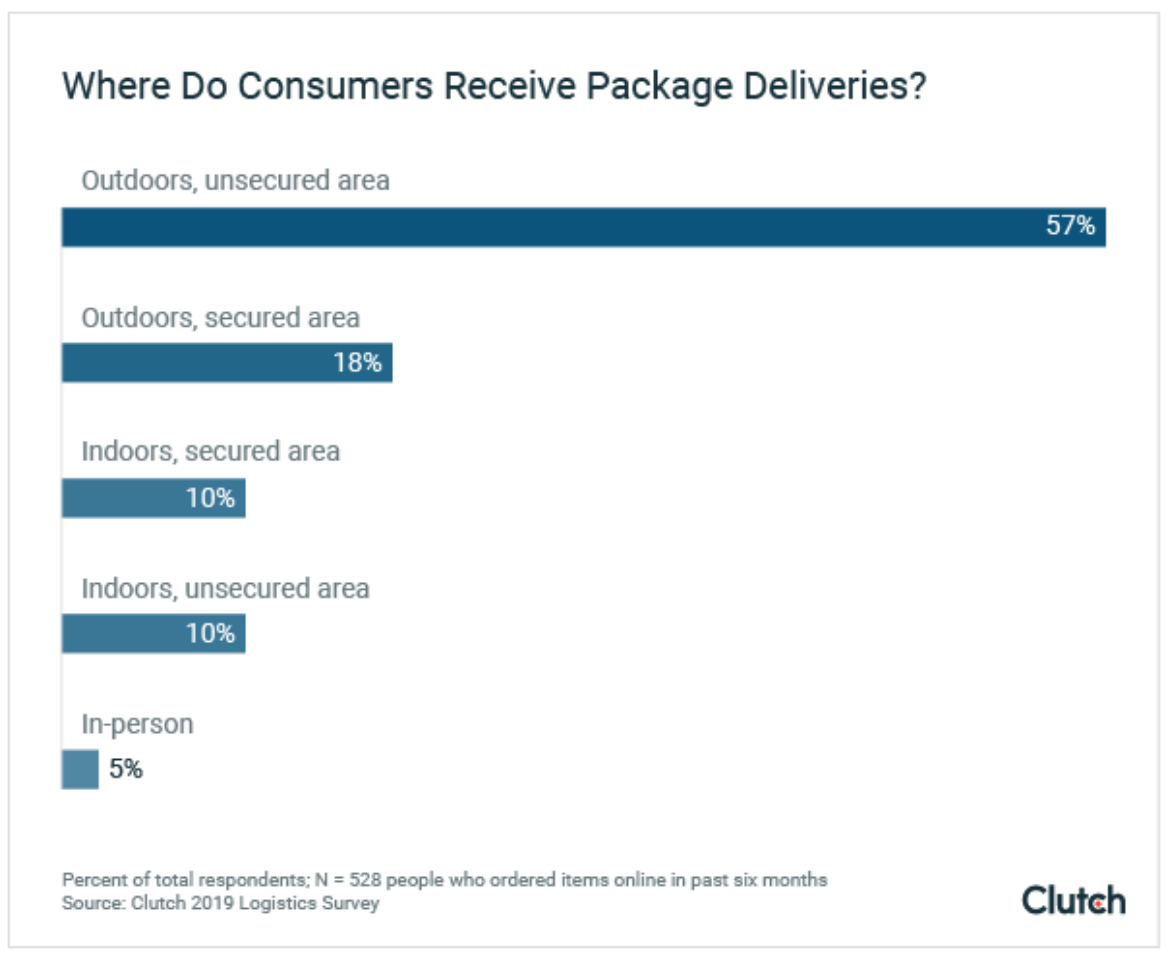 According to a study by insuranceQuotes, an estimated 26 million Americans have had a package stolen from them.

Clutch’s survey found that 16% of online shoppers said they've had a package stolen.

These figures may not reflect packages that get stolen but aren’t reported, though. Many shoppers request that Amazon or the merchant refund them for the stolen item.

Consumers Should Track Their Deliveries in Real-Time

Taking an active role in the delivery process mitigates the risk of package theft.

Certain retailers offer shoppers a greater degree of control over their delivery timeline.

For example, Amazon allows shoppers to choose the delivery date, delivery location, and a time window that suits them.

This helps to ensure that shoppers are at home to pick up their package.

To further reduce the risk of porch piracy, the Amazon app sends real-time notifications to shoppers when the delivery driver is approaching the drop-off location. If an issue arises, Amazon calls the shopper to reschedule a different time.

Real-time order tracking limits the window in which packages can be stolen.

Only an estimated 10% of porch pirates get arrested, meaning that people must find ways to deter thieves and secure their packages.

A range of security measures can be implemented around the house.

Installing security cameras is one way to catch thieves in the act.

Jacob Dayan, an entrepreneur and finance professional in Chicago, purchased a delivery box for his home after theft.

“The [box] we purchased is large, reinforced, and requires the delivery person and recipient to enter a code to open,” said Dayan.

Dayan says that no packages have gone missing since he installed the secure package delivery box.

Amazon Key is a service that enables couriers to enter the shopper’s home and leave the package within.

Users must install a smart lock and security camera in the doorway. Package couriers can then use an app to enter the home and leave parcels in the entryway, a designed room, or even a car.

Consumers Should Use Package Lockers or Pick-Up Locations

Pick-up lockers allow people to receive packages in secure areas that are impervious to thieves.

These self-service lockers can often be found in retail, grocery, and convenience stores.

Packages are delivered to the locker via courier, then the shopper uses a unique code to access the locker at their convenience.

According to a recent survey, almost half of the recent online shoppers (45%) say they have used a self-service package pick-up locker before.

As more people are victimized by porch pirates, self-service lockers could become increasingly sought-after as a secure, local pick-up location.

Protecting against package theft requires either a secure location or a swift pickup.

Consumers must take steps to ensure their packages are secure, whether using security technology, order tracking, or self-service lockers

Riley Panko is a Senior Content Developer for Clutch, a platform by content and data-driven insights that help businesses identify, compare, and select the best services for their needs.