The Cycle is Your Friend

Gartner’s ‘Hype Cycle’ is a pretty handy little tool. It’s not exactly Moore’s Law, but as far as providing insight into where hot technologies are in the public conversation, it does a great job. If you know where your technology sits on the cycle’s pathway, you can pretty much predict where it’s going, at least from a hype standpoint.

What the ‘Hype Cycle’ does is to track how the publicity for a given technology evolves, both quantity and content-wise, from the time it’s identified until it matures. Here’s how it looks: 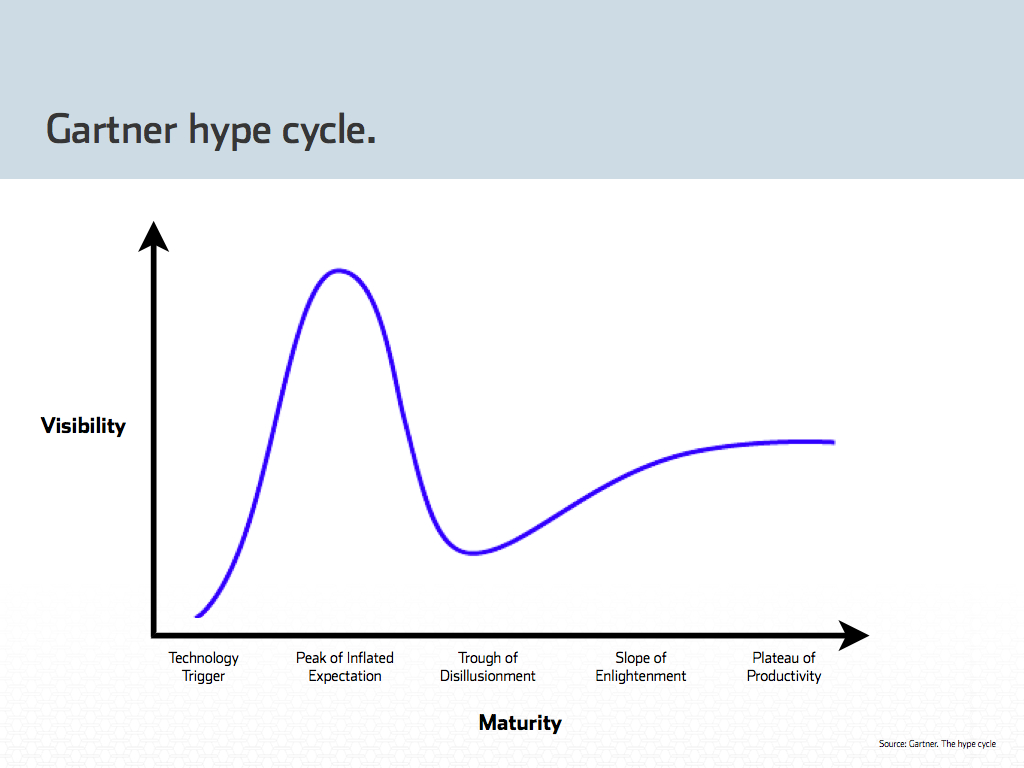 The milestones on the time axis really tell the story. From the left, they include:

Once you understand the hype cycle, you gain perspective on what you may be reading on certain subjects. For example, we were all inundated with articles about ‘the cloud” a few years back. Its potential was undeniable. However, security concerns, outages, and other issues arose and overwhelmed the positive publicity for a time. Clearly, though, the major issues are in the rear view mirror and cloud-based technology is trudging up the slope of enlightenment. Some companies are still holding off, but cloud technology and its benefits are well understood. Continued successes will move the cloud into the mainstream.

Similarly, other technologies we’ve tracked on the ec-bp.com site can be slotted onto the cycle. Big Data is on the Peak of Inflated Expectations, but some issues identified by early adopters are beginning to crop up as it enters the Trough of Disillusionment. The Internet of Things (IoT) is likewise heavily hyped at this point but we’re beginning to see articles related to security concerns and other potential problems. These three technologies (cloud, big data, and IoT) are so broad, though, that you can actually see specific applications (ie. cloud storage, cloud ERP, cloud SaaS) at different levels on the cycle.

The point is that once you understand the cycle, you don’t necessarily jump on the bandwagon when you read the first gushing publicity piece on a technology, and you don’t lose interest in it when you see something critical written. If you’re by nature conservative, you wait it out until it matures. If there’s a specific need for the technology by your company, if you see a market niche you may be able to exploit that could be unleashed by the technology, or you’re an investor looking for a return, the Hype Cycle helps you put into context what your research may be telling you. The reward of being an early adopter may well be worth the risk, but if you decide to wait it out you’ll have a good idea on where you may want to jump in later on.

Gartner’s Hype Cycle may not be perfect, but it can certainly help make sense of the voluminous information you may have to wade through to understand a technology that may, or may not, be able to provide competitive advantage to your company. Gartner does a great job on these issues, and their Hype Cycle is a winner.

Read 10402 times
Rate this item
(0 votes)
Tweet
More in this category: « What is Amazon Supply Doing? Are We There Yet? »