The IoT (Internet of Things) is getting closer all the time. Of course it's easy to think about connecting your thermostat (already done), your refrig (already done) and your TV (also already done). But that's just the tip of the iceberg. Two of the main stumbling blocks to proliferation are price and size. But that's about to change in a big way, paving the way for the replacement of RFID devices as supply chain management tools.

Intel has launched its combined 3G modem designed specifically f0r IoT devices based on very small chip sets. The device is 300mm and is described by Intel as ""industry's first design to combine transmit and receive functionality with a fully integrated power amplifier and power management, all on a single chip." That's pretty impressive, and as this image shows, the device is about the size of a penny.

That makes it ideal for wearable computing devices and other things that can house these small transceivers.

But Intel's device is gargantuan in comparison with what some Stanford engineers have shown recently. And it doesn't require a power supply to operate. The Stanford device is miniscule as you can see in this image, and does not need a battery or any other power supply because it harvests energy from surrounding radio waves. When these are being produced in quantity the price will be competitive with RFID tags and can be embedded in common products at the item level. 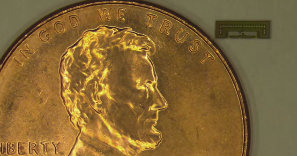 Here's Amin Arbabian's video explanation of the development. It's exciting to think of these intelligent devices communicating without the need for attached power supplies.

Last modified on Monday, 22 September 2014
Read 2526 times
Rate this item
(0 votes)
Tweet
Tagged under
More in this category: « The Connected Car Is In View Don’t Overlook the Printer »