Getting the GREAT Out of EDI Inte-”great”-ion

Ok, before I go anywhere with this post I will admit the title is a bit corny. All I ask is to grant me a little leniency with the obvious cheese simply because it hit me like a “eureka” moment and there was no way I could pass up the opportunity.  Now that the pink elephant has been addressed, I can get into one of the topics that I am most passionate about within the EDI industry – integration of EDI into an organization’s ERP system. In order to truly reap the benefits of EDI, integration is not an option but rather a necessity. Any other configuration relegates an EDI relationship to not much more than an email or fax machine which is in direct opposition to the core purpose of EDI.

Being able to work all along the EDI chain from managed services provider, to VAN, and currently in the manufacturing sector, I have experienced the benefits and pains of every degree of integration from complete hands off service bureau to total EDI integration in and out of major ERP systems. While I believe with the proliferation of web forms, SaaS, and cloud computing,  the service bureau should be going the way of the dinosaur, one would be hard pressed to  argue the cost/benefit of integration  with the small manufacturer that only receives a handful of EDI orders per year. In a perfect world, use of this option would be only a temporary quick fix to a start up business attempting to gain a foothold in the marketplace. As the business grows, realizing the efficiencies of integration should not be ignored as a very important piece of business operation. 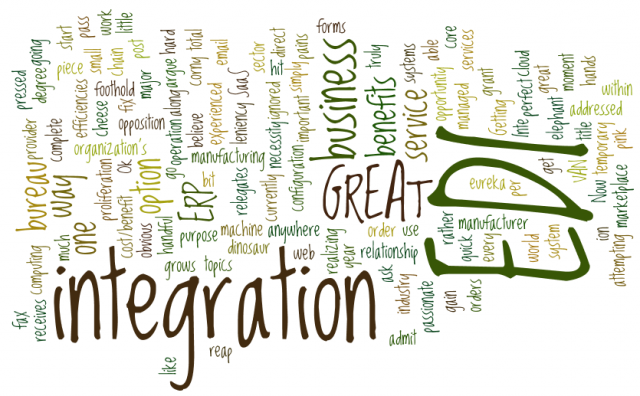 Another scenario that I have had the unfortunate experience to work with is the “rip and read” EDI program.  In this program an EDI order has been received, but instead of flowing right into the ERP and beginning the order to shipment process, a printed copy of that order is given to the order entry department. This simply is a cousin of email and a glorified fax and will never allow the EDI program to generate a return on investment for the company. Simply put, it is a means to project to the customer base that you are capable, but removes any potential savings.

That brings us full circle to complete ERP integration. Allowing orders, invoices, and ship notices to freely pass between trading partners is the stuff that EDI was built for. Currently executives are focusing heavily on supply chain efficiencies which are driving models such as JIT order fulfillment to become more of a standard rather than an exception. When they begin to ask how to implement such systems of operation, only total data integration will allow success in these environments. While full integration may be more capital intensive at first, it will soon pay for itself in eliminated errors, inventory turns, and every step along the Order to Cash path.

There is only one caveat to fully integrated systems that I have found to be especially frustrating, and that is when one link in the chain fails to follow protocol and tries to put in an order manually.  Invariably, the order entry staff will not have any idea that the order feeds supporting documents such as the 855, 856, and 810 and will only enter enough information to process the order instead of other needed data such as buyer part number or location number. The ripple effect of this has the potential to either give misinformation to the trading partner or completely failing X12 or EDIFACT standard validation. Either way, troubleshooting and resolution coordination usually falls at the feet of the EDI team. While this is only a small issue, it has proven to be the very bane of many EDI coordinator’s existence.

Read 2045 times
Rate this item
(0 votes)
Tweet
More in this category: « EDI and ERP Supply Chain Data on the Move – An App for That Could Be Coming to a Smart Phone Near You Soon »