Cash Flow Disaster - How Would You Fix It?

My first horror story is about a company much like any other. A mid sized supplier; not at all out of the ordinary. The company had (or at least THOUGHT they had) a great EDI program that they had implemented, and things were going well. They were ahead of the game, using EDI when many other companies hadn't yet taken the leap. At first glance, things seemed to be going well. Customer demand was high, orders were coming in left and right, and shipments were up from the previous year. It was a time of great celebration, especially in such a rough economy. Things were looking good for these folks.

Just when the owners and staff were getting comfy things started to get a little strange. The accounts receivable staff suddenly was not able to keep up with their workload. This was very strange, since there had never been a problem with this sort of thing before. Why would there be a problem?  Sales were up, so what was there to possibly worry about? I helped them look into the situation and found that  more and more invoices were not being paid. What in the world could possibly be causing this rapidly growing successful company to be losing all of this revenue, and having such a problem with getting paid? 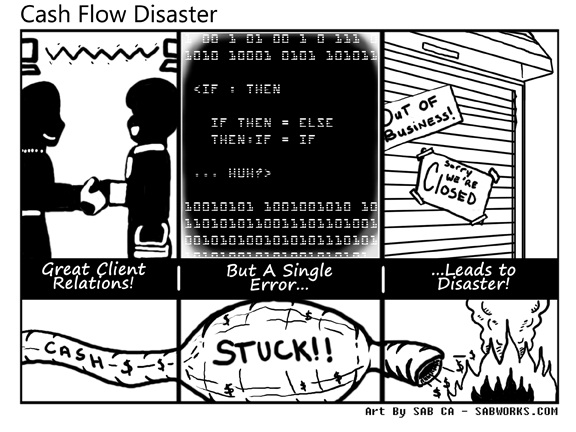 After digging into the issues I found that customers were not paying for their invoices because they contained EDI syntax errors that needed to be corrected before the customers were able to pay them. Of course, the company's customer service department and accounts receivable department contacted their internal EDI department. Surely, this was just a slight snag or an oversight that could be fixed with a quick click of a mouse, right?

Not so fast. The company's internal EDI department denied that there was a problem with the system. How could this be? Then started the back and forth between customers and management over and over again. Imagine the frustration of not only the customer service staff, but the customers themselves, being told over and over again that they were wrong. I jumped into the middle of the fray and finally determined that there was indeed a problem. Every day new invoices were being affected, and the problem just continued to grow. What now?

The company tried to at least temporarily get the customers to switch back to manual paper invoices, but they all refused, of course. They had signed up for the efficiencies of EDI, and they weren't going back now! The company tried to correct  the problems with the EDI data manually, but that was a giant fail. It was way too time consuming, and a huge number of errors were being made. The business was not getting paid, and all the errors were causing huge penalties, which were costing even more money. It was simply overwhelming.

This business had found itself inside a rabbit hole, falling fast, with no obvious way to get out. Owners and management scrambled to find help from outside resources, (like me) but it was simply too late. There was nothing left that could be done, as this company had simply fallen too far into that rabbit hole. Even though customer demand was high, and orders were stacked to the ceiling, the company ultimately had to shut down. There was simply not enough cash flow to keep this once successful business afloat. Imagine the embarrassment, disappointment, and shareholder law suits this company was facing.

Could it have been avoided? Is there any way this company could have side stepped this disaster that ultimately caused their demise? Of course. Check in next time for my next disaster story.
Read 3521 times
Rate this item
(0 votes)
Tweet
More in this category: « 'tis the Season... For Predictions! Cecil's Disclosure »