Customers Are Not Always Right - Until They Stop Being Customers

I was called in to facilitate a confidential EDI productivity meeting with a group of senior management officers from various medium size companies. The meeting was great, right up to the point that I uncovered an alarming similarity. It would seem, at first glance anyway, that these companies had little in common. Each of these companies operated in very different fields. Each one had very different operating budgets, and they all were working hard to meet very different goals. What they did all have in common was a very similar problem.

The problem? A trust issue, in a sense. The managers did not know who they could trust. Should they trust their customer or should they trust the members of their own internal staff? In preparation for important customer management meetings, the senior management staff would prepare all sorts of documents, facts, and arguments related to EDI. It would all be laid out and ready to go, and just by looking at the cold hard facts, there was no arguing with the effectiveness of EDI. 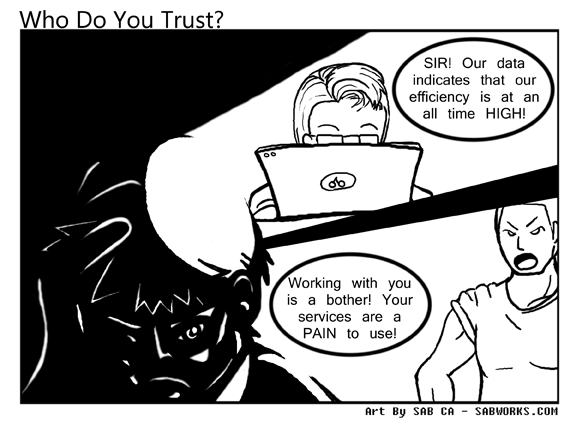 However, once the senior managers heard the feedback from their customers, things started to become a little cloudy. It seemed, oftentimes, that the customer's perceptions and experiences with the EDI systems were completely different from what the facts and documents argued. And in a war of documentation, the customer's claims were backed up by their own comprehensive data and reports.

So, who were the senior managers supposed to believe? The internal staff, who was telling them how successful and productive their EDI systems were, or the customers, whose unhappiness was continuing to grow? Often times, the customers were having issues and complaining that the company's internal staff didn't even acknowledge. From where the staff were sitting, there were no issues, and they didn't understand why the customers were making up all of these issues that, from their perspective didn't exist.

Who should those managers be putting their trust in? Who was right and who was wrong in this situation? What if something similar is going on in your business and you don't even realize it? There has to be a way to determine where the problem truly lies.

If you're worried about similar issues in your company (and you should at least be interested in finding out)? Read on to find out how to avoid these issues and know the way to avoid having the same problems happen to your business.
Read 3107 times
Rate this item
(0 votes)
Tweet
More in this category: « Upgrade Surprises Supply Chain Mayhem - Avoid It »