There's a recurring problem here as you may already be picking up on. Problems start small and get out of hand quickly. My next horror story takes place at a mid sized manufacturing company, whose problems snuck up on them when they least expected it. This company was sitting on top of the world. They had prepared themselves for EDI problems. They had done their research, and heard the other horror stories. They decided to take matters into their own hands, and circumvent their own technology in an attempt to "beat" any EDI problems that might arise.

The company extensively trained every single employee to read and interpret raw EDI data, and to compare it to the data in their SAP system. The company was full of pride over the huge strides they were making to increase understanding of EDI in their company and were not concerned with the increased order entry time or the increased labor costs that came along with longer order entries. They felt that the increased labor costs were justifiable, given the advantage they had over their competitors when it came to EDI and customer service. 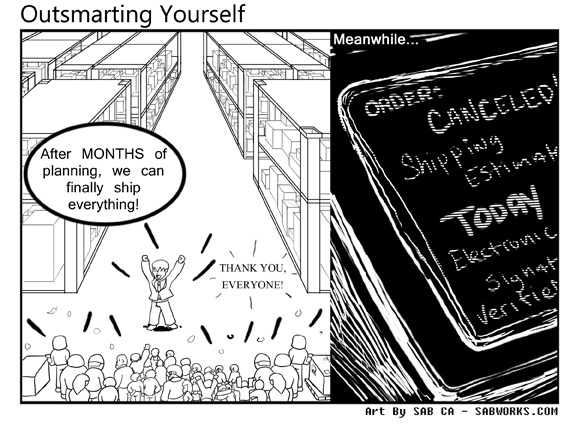 In November this company received a huge order from one of the largest retail chains in the nation. The order was complex, covering a huge array of products, and was placed almost seven months in advance. Meetings were held, plans were made. The company had to make extensive plans and invest extra funds to get things all lined up for the order. However, the company knew that this large order would be very beneficial to their company, so they were happy to put in the extra work it required.

Fast forward to the day the order was to be shipped. The company's warehouse was filled to the brim with product for shipment, so full that it was hard to even walk. Arrangements had been made to push back all other customers' orders to the next day so the company could focus on getting this one big order out... the one they had been preparing for for so long. Additional employees were brought in to assist on this big day, and everyone was ready and waiting to get the order onto the delivery trucks.

After lots of panic-induced calls with multiple contacts at the retail company, it turns out that the entire order had been cancelled just prior to midnight the day before, via an electronic message. Why did no one catch this? The EDI system automatically accepted the message. All of those employees, the same ones who had been so extensively trained in EDI, had never seen anything like that message before, and they ignored it.

What became of the huge order? The customer refused any responsibility for the order, arguing that they had placed a cancellation. Of course the cancellation order could have been rejected for a bunch of reasons, but their system automatically accepted it.

And the worst part? They were right. The customer's cancellation had been accepted by the system, and the problem fell solely on the manufacturing company. All of that extra time, energy, manpower spent to prepare for the order, for nothing. All of the time, money, and energy spent to train each and every employee in how to read raw EDI data, and they were still unprepared to handle such a simple issue.

What did this supposedly well prepared company do wrong? How could they have prevented this simple transaction from wreaking havoc on their business? Read on to find out what this company should have done to avoid this mess.